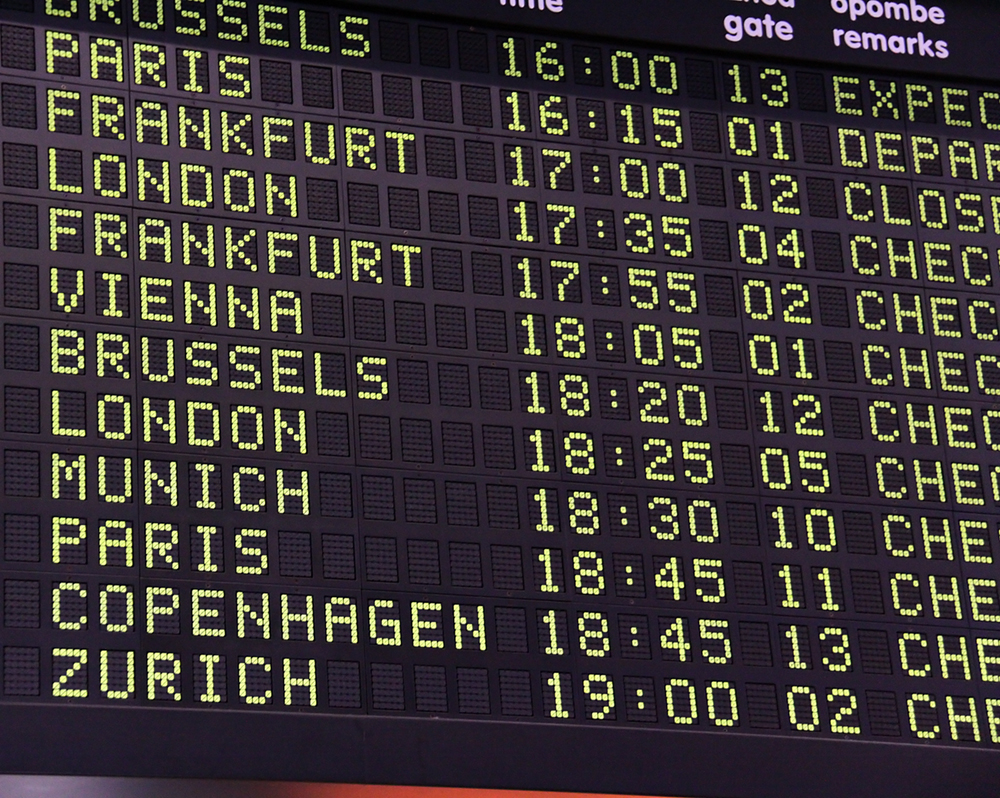 By Sveinn Gudmundsson
With air transport growing exponentially, Europe’s main transfer airports – or hubs – are close or beyond saturation point and losing traffic to competitors. The analysis of flight transfers at Heathrow and Frankfurt shows the key role played by airline networks. It’s a role that public authorities need to consider when they decide on changes in airport capacity like new airports, runways or terminals.

At a time when strong growth in air traffic is forecast, there are more questions surrounding ‘hub’ airports in Europe than in any other part of the world.
Forecasts show passenger numbers rising by 5.5% annually over a 20-year period: in 2013, that meant 170 million extra passengers in the global airport system; at the same rate, annual growth will reach 330 million more passengers in 2025. The constraints weighing on infrastructure development mean that this rapid growth has led to controversies surrounding airport expansion. London’s Heathrow Airport, now beyond its saturation point, is one of the worst affected, with on-going debates over its expansion creating uncertainty for airlines using it as a transfer hub and other airports benefitting from its congestion spills. Despite a recent decision to add a third runway and a sixth terminal in Heathrow, at least a decade will pass before this extra capacity will be ready and the tough questions surrounding health and environmental effects of the airport are likely to gain momentum in the meantime.

Today, airlines feed the long-haul connections with fewer and fewer short-haul flights which are not sustainable for a saturated hub, especially since limits on additional take-off and landing slots influence the monetary value of existing slots. To maximize the cost effectiveness of valuable slots the airlines tend to replace such less profitable flights with long-haul flights using larger aircraft at the same time that the average number of passengers per flight increases (implying rising average aircraft sizes and rising load factors). Aircraft manufacturers like Airbus are directly affected by decisions to expand airport capacity at congested hubs as it affects the cost incentive to operate larger aircraft like the A380 in such airports. In the presence of hub capacity constraints the airlines have no other means to grow but to increase average aircraft sizes. Today Heathrow and Frankfurt are the world’s number two and three hub airports in terms of A380 flights, following Dubai (Emirates Arlines is the largest A380 operator in the world).

But at the same time, not being able to add routes and flight frequencies in congested airports carries the risk of fragmenting airline networks and boosting the competition that can pick up the spills. Faced with this situation, airlines have several strategies; they can raise their prices to reflect excessive demand, use larger aircraft to transport more passengers or move some of their business to other airports, or allow competitors and partner airlines to pick up part of the spills from unaccommodated growth in their congested hubs.

In the case of Heathrow, a key figure illustrates the negative effect of congestion on short-haul intra EU connectivity: in 2010, Heathrow had only 46 short-haul routes offering at least three flights a day, while Paris CDG had 78, Amsterdam had 67 and Frankfurt had 74. Not only does this trend cause reduction in the EU and rest of world connectivity in Heathrow and Frankfurt, but also strengthens the route networks of low cost airlines that serve a growing “self-connect” market in the EU.

Our research focussed on the consequences of this evolution in passenger and transfer traffic, analysing the effects of spills linked to congestion at Heathrow and Frankfurt with particular attention to the UK, Europe and the Gulf States. The aim is to understand how airlines adapt their network strategies to these changes, to assess the negative effects of reduced growth in new routes and flight frequencies associated with congestion at saturated hubs, and the positive effects on alternative airports, and also to determine the negative impact on other airports when a major hub gets a boost in capacity. Such capacity growth constraints have impact on airlines’ fleet strategy (average aircraft sizes), network strategy (fragmentation of the network to maintain growth), competition strategy (congestions spills due to unacommodated new flights and routes) and alliances and mergers strategy (to secure access to new hubs and airports to strengthen network flows).

Hub spills linked to the establishment of alliances
Our investigation involved creating models to calculate spills in passenger traffic from Heathrow to other UK airports in the first instance, and then spills in transfer traffic in Heathrow and Frankfurt to nine alternative EU and Gulf airports. For transfer traffic we looked at the impact on intercontinental routes and intra-European routes, factoring in overall traffic. Next, we used information from the OAG database to compare these models with real traffic from January 1997 to December 2013 for Heathrow, and to December 2011 (when new capacity was added) for Frankfurt.

For Heathrow, the results show significant intercontinental passenger spills to Gatwick and a lesser degree to Manchester and Birmingham, and significant connection spills were detected to Munich, Paris CDG, Madrid and Doha for intercontinental transfers and significant spill to Munich for European routes. In concrete terms, this means that limits on airport capacity mostly strengthen the big airlines like Lufthansa and Star Alliance (Munich), and Air France and Skyteam (Paris CDG), and to a lesser extent hubs in the Gulf States (Dubai, Doha and Abu Dhabi).

The cross-analysis of Heathrow and Frankfurt shows an asymmetrical spill effect when compared with overall transfer traffic: here, Heathrow’s biggest losses were to Munich, Paris, Madrid and Doha, while Frankfurt spills went to Munich, Amsterdam, Abu-Dhabi and Istanbul Ataturk, whose main airline is Turkish Airlines, which is linked to Lufthansa through the Star Alliance.

This asymmetrical spill effect is linked to spare capacity in these alternative airports, but also the various alliances between airlines and the geographic location of the hubs, e.g. a connecting passenger may be indifferent to transferring in Heathrow, Munich or Istanbul: it is not the cities that attract these passengers but the convenience of connecting over the hub. The fact that the beneficiaries of congestion-led spills differ markedly according to the hub under consideration, underlines the importance of the airlines’ business strategy in response to hub saturation. This strategic dimension and the growing competition between the different alliances should be given more weight in debates on airport expansion that tend to be highly focused on the local economic benefits, rather than the overall network (including alliance and umbrella merger partners) or the wider social costs.

Ultimately, decisions will be made by local politicians, and yet the total network and social perspective is critical. While more and more hubs, particularly in Europe, are seeing their capacity squeezed, the question for politicians should be around how to balance airport growth taking into account the “natural flow” of traffic spills within a country and other countries, to alliance partners, competing airlines and regions. Yet as pointed out in our first article “Spillover effects of the development constraints in London Heathrow Airport” published in 2014, it is not necessarily straightforward from a total network strategy perspective to expand only the main hub in a country. Other regional airports that are strengthened due to spill effects are affected negatively and alternative hub airports that may be in a better geographic location to minimize the social costs (environmental and local health impact) of airport expansion may be forsaken to maximize the economic benefits. In this early work we showed that spills from Heathrow airport were flowing for the most part to Gatwick airport that due to its geographic location and lower social costs of expansion would have been the best candidate for capacity expansion if Heathrow was left to grow mostly through larger average aircraft sizes operating long-haul flights. The UK Government gave the official go-ahead for the third runway and the sixth terminal at Heathrow airport on October 25, 2016, with planned completion around 2030, if no major construction delays take place.

Methodology
The European airport congestion spill project was led by Sveinn Vidar Gudmundsson (TBS) and Renato Redondi (University of Bergamo). The project involved the development of a single (Heathrow) and double (Heathrow and Frankfurt) spill models, using the OAG schedules database and a new statistical estimation approach applied to this problem, borrowed from the finance literature on spills in bond markets. The study results were published in two separate articles: one appeared in the Journal of Transport Geography in 2014 under the title: “Spillover Effects of the Development Constraints in London Heathrow Airport”, studying congestion spills of Heathrow airport on UK airports; and the second article appeared in Transportation Research Part A under the title: “Congestion spill effects of Heathrow and Frankfurt airports on connection traffic in European and Gulf hub airports”, looking into connection spills of Heathrow and Frankfurt airports on other European and Gulf hub airports.

• Spillover effects of the development constraints in London Heathrow Airport

Professor Gudmundsson also participated in a debate on this topic in 2014 with Daniel Moylan, the then Mayor of London’s adviser on aviation, under the title “London Airports: Meeting demand” organized by the TSU Seminar Series “Transport Controversies”, at The University of Oxford. See links below to the event and the podcast: 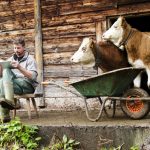 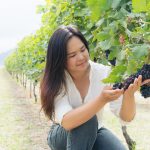 Next article :
A Comparison of Chinese investment in the French and... 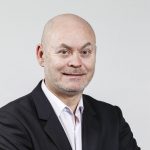 Sveinn Vidar Gudmundsson is Senior (Full) Professor Strategic Management, Toulouse Business School, and serves as Vice President of the Air Transport Research Society. Sveinn received his PhD from Cranfield University and a BSc, MBA and MSc from Florida Institute of Technology. Prior to his academic carrier he held senior management and consultancy positions in the … [Read more]

Get an alert when an article is published: